No love for the Dirty Birds

The proof is in the pudding. As a start, check out ATL’s category scores through week 13 in the graph below. Very good teams should score positively in the x-axis items that end with the letter “o” (for offense) and negatively in the x-axis items that end with the letter “d” (you guessed it). Off the bat, it’s easy to see that the Falcons don’t run the ball well nor do they defend against the run well (in other words, a good running and run defending team would have those scores flipped). The same can be said of passing offense and defense, which is also flipped in the wrong direction for a good team. This is especially surprising given the season that Matty Ice is having. No points for 4th quarter comebacks, I suppose. 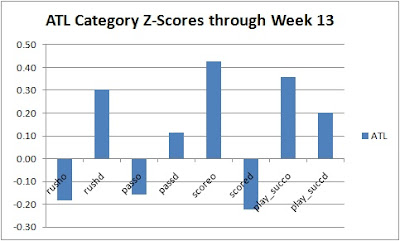 How does ATL compare to the teams ranked ahead of it that it has played? Those results are even uglier, especially against the NFC squads. The graphs below are broken up just to make them easier to read, and the results speak volumes. Based on the explanations above, readers should be able to figure out what’s going on here. Versus the NFC competition, ATL looks good only on scoring offense. Against the NFC, ATL holds the scoring offense and offensive play success advantage against PIT and BAL…which makes sense given the offensive snooze fest the AFC North rivals put on this past Sunday night. 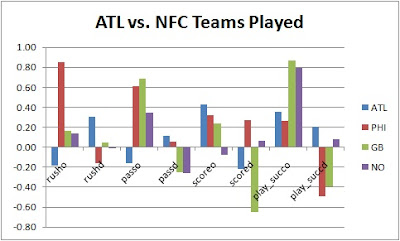 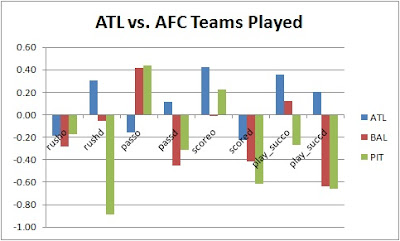