NFL talking heads, a pantheon I can join only if I keep this up for many years, speak often of the supposed parity in the NFL this season. There are many ways to both qualitatively and quantitatively define parity. For instance, does parity mean that teams that observers expect to lose a particular game because their winning percentage is less than their opponent’s actually win that game 50% of the time? In other words, statistically speaking, does NFL parity mean that game results are as predictable as a coin flip?

Hardly, but we thought it would be interesting to look at parity through the lens of the M-P ranking system. Arguably, because our system rates the relative factors of a particular team’s success versus its opponent and the rest of the league, the M-P rankings should be more valuable at determining league parity rather than results parity.

The graph below tracks the variance in points earned across all 32 teams after each week of the NFL season from after play in week 3 through after play in week 16 in each season from 2000 to 2009 and week 3 through week 10 for the 2010 season. The 2010 season is in bolded blue (the graphs are easier to make out if you click on them to enlarge). The variance of M-P points earned by each team after each week is a good indicator of parity because the points represent an aggregate of z-scores reflective of our offensive and defensive play-by-play inputs. In seasons where the NFL is competitive, one would expect teams to cluster more closely around the mean (a z-score of 0) than in seasons where the league was dominated by a particular conference, division, or team. 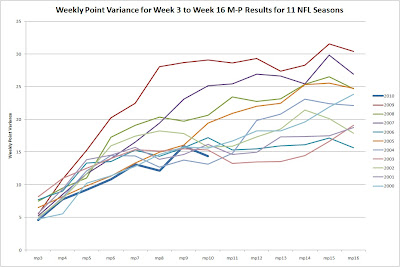 This season does appear to feature the greatest parity through weeks 3 to 10, although it is clearly following a well established pattern from other seasons. It makes intuitive sense that as the season goes on the good teams separate from the bad (even in years when the league is very competitive) and variance increases week to week. Ironically, the gulf between good and bad teams was the most severe at nearly all points last season.

So, through 10 weeks of play in each of the last 11 seasons, what season has the greatest parity? It turns out to be the 2010 season. Through last weekend, the average variance in points earned in weeks 3 through 10 was 10.99, compared to 11.32 in 2000 (second) and 20.02 last season (greatest disparity). The results are featured in the table below. 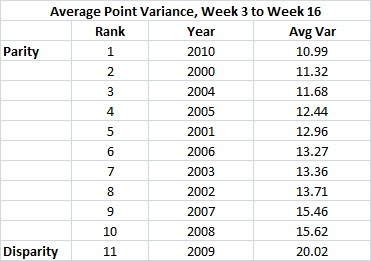 Another way to think about parity is to ask whether parity exists to a greater degree among the above-average teams or the below average teams. The graph below compares the range between the number one ranked team in each week and the mean and the last ranked team and the mean. This season, not surprisingly considering that our last place team has been the same team that has gotten consistently worse since after play in week 2 (tough year for folks in Carolina), the league’s last ranked M-P team is “worse” than the league’s top ranked M-P team is “good”. So does that mean that greater parity actually exists at the top? 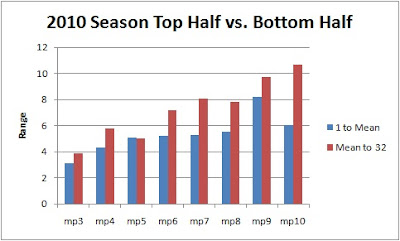 That theme holds true for the group of teams above average and the group of teams below average as well. More often than not week to week, the below average teams are further below the mean than the above average teams are above it. As a result, the variance in weekly points earned by above average teams is less than the variance in weekly points earned by the bottom half. The greater in amount the mean or variance of points for each group is also helps determine the degree to which a season has more or less parity. Compare the y-axis scales of the 2010 and 2009 season graphs below, which are the two seasons in the last eleven that have featured the greatest and least amount of parity through week 10, respectively. 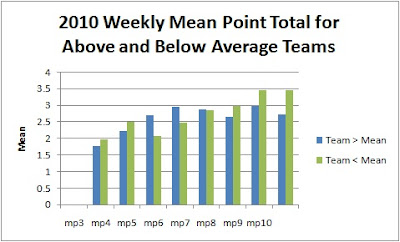 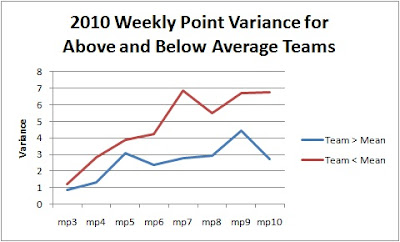 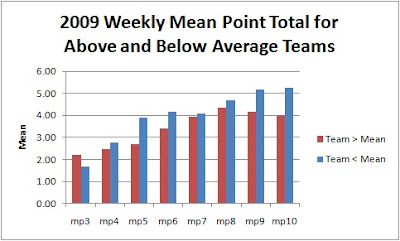 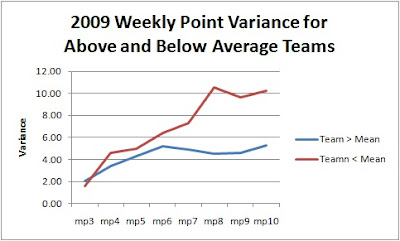 On paper there are some colossal mismatches this weekend. Consider the following:

I became curious about how these look from M-P’s point of view, so I did some research. In some cases, these matchups are as one sided as they appear. The biggest gulf is the Steelers-Bengals game where PIT holds a 22-spot advantage over CIN in the M-P rankings (second versus 24th). Of the games above, the most closely matched from M-P’s point of view is the Bears-Bills game, where the Bears hold an 11-spot lead over winless BUF (19 v. 30). The average separation is a little more than 16 places on the M-P scale following play last weekend (week 8).

Most surprising to me is how the matchups breakdown category-to-category, especially since there are quite a few instances where the underdog is ranked higher than the favorite in a particular category. CIN, for instance, is ranked four spots better than NE in M-P’s highest weighted category, offensive play success (14th for CIN, 18th for the Brady Bunch), and a touch higher in rushing offense. The second biggest difference between M-P ranked teams is 19 in the Saints – Panthers game, yet the Panthers rank higher than New Orleans in three categories including defensive play success (third most heavily weighted category).

And of course the Cowboys bring some irony to their matchup with the Packers, even when it comes to M-P rankings. The only matchup where the “favored team” (in terms of both M-P rank and win percentage) is ranked higher than the underdog in every M-P category is the GB-DAL game. This despite the fact that the old NFC rivalry features teams separated by “only” 14 spots on the latest M-P pole, second least in the sample above.
Posted by Client 9 at 5:09 PM No comments: